This is an intense week!
Today I was the support person for my young office mate in a meeting with HR. I didn't expect it to go well and it did not.
Only an hour and a half later I was interviewed for the position which will replace my job (ie, my role plus an extra 15 hours a week) Given that I had been supporting my colleague I was offered a re-scheduled interview but I wanted to get it over with and I made the right call on that. Any mistakes I made today, I would have made tomorrow but now it's done and I can forget about it.

I realised that I don't speak "corporate". Well actually, I knew I didn't speak corporate but I didnt know just how often it manifests. "Tell us about a time you developed a relationship in order to achieve a business outcome?" I meandered around the topic and later realised that what they were asking is effectively "have you ever made a client or a sale?". I'm confident that my answer was ok but boy, it took me a while to get there!

It was my first ever interview by a panel and it was an hour long. I was happy with it but I'm a bit drained now. Was it the interview or just the day? I won't ever really know.

After all of that I went to see my very ill friend in her nursing home, I had promised to bring Lucy one time and Lucy is about to go away to live in Deniliquin (600km) so it was a matter of seizing the day. A few months ago our front fence was broken and I was going to the hospital to pick up my friend R. I took Lucy with me to avoid accidents of the escapee variety and the pup took an immediate like to R, who returned the affection. It's been a sweet little love story and while she has a fabulous attitude, there isn't a lot of joy in R's life so I often get leaky eyes to think of it.

Tomorrow I will have a house inspection / meet & greet to become a greyhound foster mum. That's a story all of it's own which I will tell eventually. At the same time that I am assessed by "Homeward Bound Hounds" Briony will be packing a trailer full of her hastily acquired worldly goods. The forecast temperature is 40C. Challenging is an understatement.

And on Friday we will set off to the "Deni" abode, I take great pleasure in saying Lucy will be a Deni Dog. Small things, small minds and all that.........

I"m rapidly falling behind commenting on blogs but I try to say something now and again to let you know I'm reading. 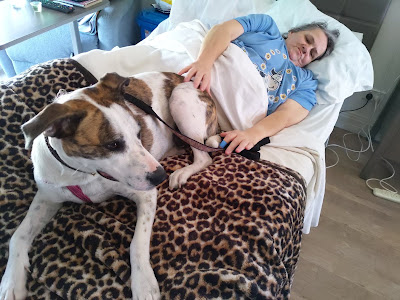