I dropped by a local donut shop yesterday, I always thought it was a wholesaler so I haven't been there before.
The car park was narrow and there was a very large truck parked at the side of the main thoroughfare. That was ok, I parked, bought my donuts and came back to the car. I had to do a little bit of manouvring to reach the "Exit" ramp and the truckie was watching. I drove part way down the ramp and discovered it wasn't an exit at all, there was a locked gate at the bottom.
Hmm, it was going to need some concentration to reverse up the ramp and then get into a good position to leave.
The truckie was still watching, a broad faced Pacific Islander looking guy who I guessed would be quite laid back. He came over to speak to  me and I hoped against hope that the dodgy electric window would actually open before I looked more incompetent.
It worked.
He spoke with a slight New Zealand accent "I think y' need to reverse out"
I didn't want to, preferring to do a tricky turn than reverse that far "No, I want to turn around and drive out forwards"
"Ok, If you wanna do that, I'll direct ya"
I knew I could do it but it was his truck I would hit if I stuffed up so I swallowed my pride.

I was getting closer to the truck and he'd put the lifter down where I couldn't see it, I was feeling the pressure so I made a joke "they better be good donuts!"

He was so tickled and his face broke into a generous laugh "hehehe bitter be good, eh?"

"no worries, you do this stuff every day"

he started to laugh again as he waved me off "bitter be good, eh?!" 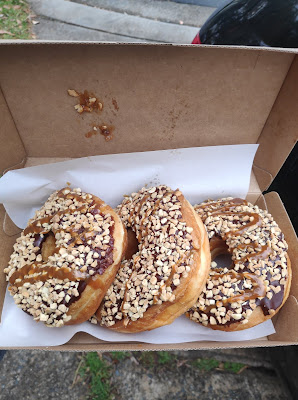