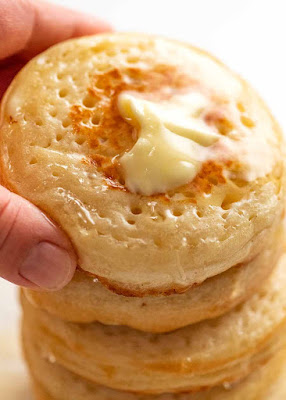 Recently I saw a post asking what people put on their crumpets. There were a lot of people who favour butter & marmalade

or butter & vegemite. I'm very familiar with all of those but there were a few options I haven't tried:

crumpet with butter, salt and pepper.

The most elaborate one was two crumpets sandwiched together with peanut butter, nutella, condensed milk and cheese. The whole thing was toasted in a pan.

I decided on a a little lockdown experiment so I'm eating crumpets for breakfast this week and I'll try some of the unfamiliar options.

I can tell you that peanut butter, nutella, condensed milk & cheese is acceptable but not as interesting as I had hoped.

Crumpet with scrambled egg is nice enough but I prefer the textural contrast of egg and toast.

Do you eat crumpets? what do you put on them?