Thinking of Red's request for more weather talk  I took some photos of the fog last week: 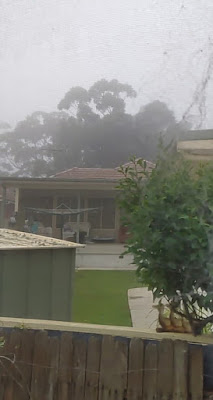 The view from my kitchen window across the neighbour's yard. 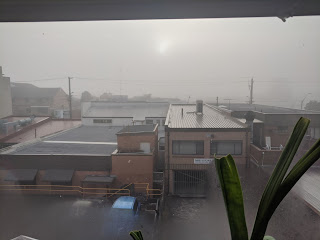 Keaghan sent me a photo from his kitchen window.

As an aside, this is the view the money grabbing land lady tried to tell  me was a "city view". I didn't expect a view and have nothing against a few suburban roof tops but that kind of ridiculous "spin" just makes me annoyed.

It's 14°C at my place right now which I know is positively summery for many of you but it's quite chilly for me, especially as the house is no better insulated than a tent. It was sunny today with a top of 17°C and the last few nights have been dropping to 6°C.

The greyhound people say that greys are sensitive, so much so that many of them leave air conditioning running for their dogs when the people are not home and their fussing (the people's, not the dogs') has infiltrated my brain to the point that I think I fuss over Harry more than I fussed over my kids. Then again, I didn't leave the kids on the deck while I went to work for the day. If it's under 20°C Harry wears a shirt, around 16 I add a coat and when it's going to be below 10 I put another coat on  him. It seems to work. 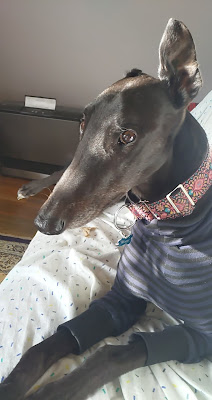 I follow #visiblemending on Instagram and am constantly amazed by the beautiful work people do to keep old favourites wearable (or to rejuvenate a thrifting find) so when the moths got to a cute little jumper of Caitlin's and she was quietly devastated,  I decided to fix it. I haven't done needlework, darning, mending or knitting in the past but I watched a few You tube videos and took myself to the craft store to get supplies. Darning thread came in black, grey or white so my dreams of a cute coloured mend had to go out the window for the time being and instead of an artistic "visible mend" I ended up doing a very practical and "not invisible enough" grey mend. I have to say I'm happy with it though, for a first attempt. Now she wants me to tackle the worn sleeve of a cream Aran patterned jumper first bought by my brother about 30 years ago. We'll see about that! 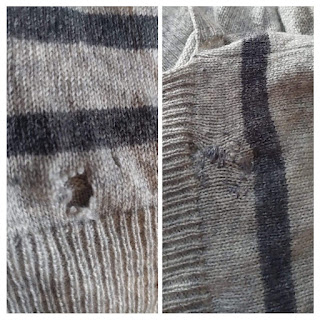 There were a few holes but this was the biggest, with the most obvious darning attempt
at June 23, 2020